Note in memo:
In honor of John Rouzer

John Rouzer, the son of Wren Coburn, of Wellston, Oklahoma, received a kidney transplant on Thanksgiving Day 2016! John and his family are so grateful for this life-saving gift and will need the help of their community to ensure he is medically and financially supported through this time of healing and adjusting. Transplants are life saving but very expensive. In addition to the extremely expensive medical bills, Wren, as a single parent, will not be able to work for a period of up to 6 months as John recovers; possibly longer if any complications arise.

On August 26, 2014 John arrived home from a normal day at school and found himself too weak to walk the distance from the bus stop to the house. His dad found him 45 minutes later resting under a tree in the yard. John couldn’t eat anything that evening and began to throw up later that night. The next day, he was at OU Children’s Hospital in Oklahoma City, OK where they officially diagnosed him with Chronic Renal Failure (kidney failure).

For the past two years, he has been doing peritoneal dialysis for 8-12 hours a night. He did get peritonitis, which is extremely painful to endure, so they had to do Hemo dialysis for a few months till it was safe to return to the Peritoneal dialysis. The past several months have been pretty smooth as far as dialysis goes. The call for the kidney came on Thanksgiving eve 2016. John had only been active on the transplant list for a few months so we were a little surprised that a kidney was available so soon. John has been so positive throughout this entire journey. He is so easy going with it all. He always has a big smile on his face. He enjoys archery and basketball at school and is a big hunter that likes guns and outdoors.

Even with insurance, there are many out-of-pocket medical expenses made more challenging as Wren had to stop work to provide the 24/7 care required. She monitors John’s vital signs, administers the many meds at the exact time and exact order, dietary restrictions, hooks up and tears down the dialysis equipment daily basis until the new kidney wakes up and cleanses the toxins from John’s body to make him healthy. There is also the over 50-mile round trip to his doctor appointments and hospital follow ups for many weeks/months to follow.

To help with the financial burden of John Rouzer’s uninsured expenses, a fundraising campaign in his honor has been established with Help Hope Live, a trusted nonprofit organization that has been providing community-based fundraising guidance to patients and their families for more than 30 years. All donations are tax deductible to the full extent allowed by law, are held by Help Hope Live in the South-Central Kidney Transplant Fund, and are administered by Help Hope Live for transplant-related expenses only. To make a contribution click Donate Now.

Your support is critical to the overall success of John’s struggle. Please know that your contribution counts. On behalf of JOHN and his mom Wren, we thank you in advance for your kind consideration.

Note in memo:
In honor of John Rouzer 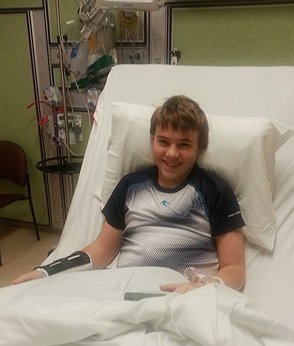