Ralph (Tubby) Holmes III is a 53-year-old man whose lungs are failing. A double lung transplant is his only chance of survival.

Tubby’s lung problems began in 2009 when he was diagnosed with Emphysematous Bullae, a disease where an air pocket grows and takes up space in the chest cavity disrupting normal lung function due to the crowding and pressure. In 2010, after 21 years working for the town of Exeter (10 of those years as an Equipment Operator for the Water Department and 11 as a Highway Foreman for the Highway Department) his failing health forced him to stop working and to go on disability. He had to give up his own business – J+J Lawncare. Although he has always been an avid sports fan, the progression of his disease and resulting lack of oxygen keep him from playing men’s softball or riding motorcycles and snowmobiles. Anyone who knows Tubby would describe him as loyal to his family and friends, a guy who can make anyone laugh, and the first to lend a helping hand. Now Tubby needs our help!

Although Tubby and his wife went to school together, it wasn’t until 2010 that they reconnected and began dating. They married recently on December 23, 2016! Just a few days after that wonderful day, his rapid decline began. Multiple bouts of pneumonia, bilateral pulmonary embolism and a double pneumothorax which required a chest tube, all led to several lengthy hospital stays. It was February 2017 when he started the lengthy testing process to be accepted in the Lung Transplant Program at Massachusetts General Hospital in Boston. Tubby has the love and support of his two sons and stepdaughter, his wife and sister who are all committed to seeing Tubby through this journey to transplant.

Though a lung transplant is lifesaving, it is also financially draining even with insurance. Tubby is facing very high expenses that include relocation to Boston for a period of months during his post-transplant recovery; enormously expensive post-transplant medications he will need to take for the rest of his life; co-pays for daily doctor visits, lab fees, parking and more.

To help with the financial burden of Ralph (Tubby) Holmes’ uninsured expenses, a fundraising campaign in his honor has been established with Help Hope Live, a trusted nonprofit organization that has been providing community-based fundraising guidance to patients and their families for more than 30 years. All donations are tax deductible to the full extent allowed by law, are held by Help Hope Live in the Northeast Lung Transplant Fund, and are considered a contribution.

Tubby is looking forward to spending quality time with his bride, family and friends, riding his John Deere tractor and driving his big diesel truck. Your help can make the difference. Please know your prayers, support and generosity are greatly appreciated. Keep an eye on Tubby’s campaign page at www.helphopelive.org because we will be planning some fundraising events soon and posting updates regularly.

Drum roll: 3 months: Ralph Holmes: simply amazing to watch Tubby transform from struggling for each breath to breathing with ease! I'm not going to lie, it's been a rough road. Our family have gone above and beyond helping us. Had it not been for Tubby's donor I'm sure he wouldn't be with us today. Beyond grateful for the gift of life from his donor. The bumps in the road have kept us on our toes. Our new routine is getting easier! Slowly catching up on things that were not priorities. Robin Holmes, now professional driver! Has taken him to Boston for appointments and blood work allowing me to work. He's feeling good, trying to stay busy. He still has restrictions with lifting, pushing or pulling no more than 5 pounds. He's hoping to be able to drive soon. We are so fortunate to have the support from around the world. We are very grateful

Day 14: Ralph Holmes: it's hard to believe it's been 2 weeks today since Tubby got his gift of healthy lungs. We have had many ups and downs. We've found out we are stronger than we thought and other times when we fall apart and wonder where we'll get the strength to get back up. Staying positive every step of the way is challenging. I can't imagine not having my family and friends helping us along this journey. This morning he had his bronchoscopy and we are waiting on the results of the biopsy. The Doctor that did the bronchoscopy was one of the Doctors that saved Tubby's life at Beth Israel Hospital in January. Dr Kheir was one of the pulmonary interventists, we spent 6 weeks there and got to know him very well. He recognized Tubby right away, even called him Tubby! Dr Kheir and the other interventists at BI were a huge part of Tubby getting fast tracked into the transplant program at MGH. Today he slept most of the day due to the sedation he received during his bronch. Still with fluid overload and AFib. No walk today because of his high heart rate. Steroids are making his blood sugars high so picked up a glucometer and supplies at MGH pharmacy. Education with the pharmacist today. Tomorrow's going to be a better day.

Yesterday marked 1 week from Tubby's double lung transplant. It's hard to believe how quickly he got his new healthy lungs. We started the process at Massachusetts General Hospital in February 8th, he finished testing the day he was officially listed March 21st (2 days after his 54th birthday) we got the call exactly 3 weeks from the day of being listed. It was the night of the "Pink Full moon" as I headed off to work Tuesday night I kissed him and said tonight's a good night to get lungs! On my way to work I called my parents. When my mother answered the phone I didn't say hello I announced tonight is a full moon it's a great night to get new lungs! My mother cautioned me to have patience. At 9pm I called Tubby to say good night. Before we hung up I said tonight's the night! My phone rang 50 minutes later! Tubbys voice on the other end, tears of joy he said let's go! I hugged my Coworker Chris and ran out the door. Phone calls back and forth with The transplant team, and family. On our way we held hands, nervously giggled, and shed some tears. This is what we worked so hard for. After surgery the surgeon said he was lucky to get these lungs when he did. When they opened up his chest they found a large infection he had very little time left. Fast forward it's been one heck of a roller coaster ride. Ups and downs but headed in the right direction. We now get to have a future. All of the prayers and positive healing thoughts and energy have helped. Thanks for the support❤

Tubby got the call from Mass General Transplant team Tuesday April 11th, at 945 pm. It was a full moon and it was exactly 3 weeks from being listed for a double lung transplant. He went into surgery at 0642am they estimate the surgery approximately 8 hours. Family present and hopeful ❤

Tubby is still an avid Patriots,Red Sox and Celtics fan! He and Valerie have their bags packed and are waiting for that call from Mass General Transplant Team for those precious lungs! His #1 Team ! He remains positive and hopeful along with all of us! Keep sending those positive thoughts and prayers his way! Thank you!

Valerie Roulo and I have exciting news. February 8, I started testing for a double lung transplant at Mass General Hospital. It has been a whirlwind of testing, blood work, more testing and going back and forth to Boston. I am thrilled to announce that as of today I am "ON THE LIST" I thank everyone that has reached out to me, phone calls, texts, messages, and financially. We have good insurance, but many costs are not covered. I ask for your continued support, positive thoughts and prayers. We need help in this journey, to new healthy lungs. It won't be easy, but it's my only option. Please continue to support myself, Valerie and my sister Robin Holmes. Valerie and Robin will be caring for me as I recover. Fingers crossed for the gift of lungs soon.

My thoughts and prayers are with you for a quick, uneventful recovery! Sending positive energy and lots of big hugs!!

Our Prayers are with you Valerie.

I've often thought about you and your high energy over the years. Many prayers to you and your family as you continue this journey on your way to wellness. God Bless.

Thinking about you guys and wishing only for the best for you!

Keep up the fight Tubby. Hope you get the word real soon. Thinking of you and keeping you in my prayers.

We are praying and sending you wishes for success! we are with you all the way!

Keep fightin' Tubby and Val!!! So happy you are on the list!!! You both deserve health and happiness!!!! Xo

Keep on fighting Tubby! We are here for you ! Those lungs are coming for you! 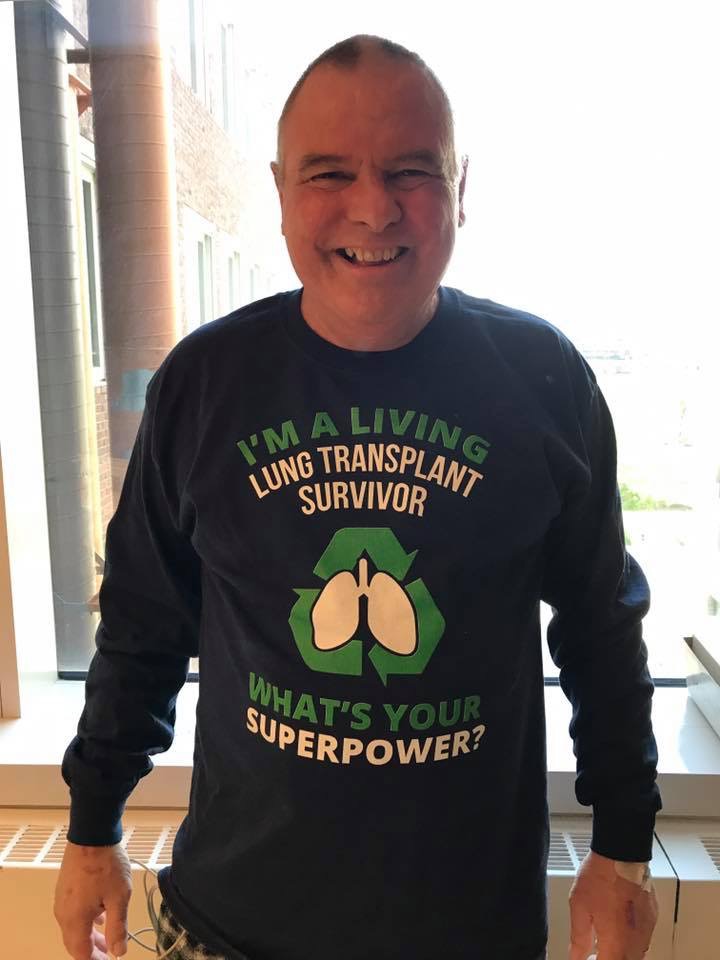