Note in memo:
In honor of Mike W Petri

Mike Petri is a happy going guy, full of life. He loves hanging out with friends, telling stories, and being the life of the party.

While he is an Air Traffic Controller in Fargo, ND, he keeps busy by dabbling in many things: DJ’ing, farming, bar-tending, cooking, gardening, and working on things in the garage. He enjoys going to music festivals, watching hockey games, boating, dancing, snowmobiling, singing karaoke, playing games, shooting, making new food inventions, and the list goes on and on. Mike is a proud American, Eagle scout, Air Traffic Controller, and is always willing to lend a helping hand.

Mike was looking forward to a February filled with fun snowmobile trips with friends and his 2015 Polaris snowmobile. February 2nd, 2017 a group of family and friends went to the upper peninsula of Michigan for a long weekend snowmobiling in the beauty. Mike stated that if his sled was still running and his carcass could handle it, he was going to join another group of friends February 10th going snowmobiling in a different area of the upper peninsula (UP).

Well his carcass made it and he made another long drive to the UP. It was a warm day and he was excited to sport his old school Suzuki snowsuit. The group of friends got settled into their rental cabin, made sure the snowmobiles were all ready to go and running well and went for a little afternoon trip. They took the trail to a bar where they had a drink and chatted for awhile until they decided they would go across the lake to eat dinner. It had just gotten dark out, about 15 miles into their trip when somehow Mike’s sled and an oncoming snowmobile collided and exchanged skis at a high speed. His ski broke off and his snowmobile flew in the air flipping multiple times over while Mike went flying off his sled.

Thankfully Mike wore a tech vest to protect his vital organs and a helmet, cracked in 3 places, but it somehow come off during the crash. Mike laid on the snow covered lake instantly unconscious. His sister, friends, and eventually an off-duty paramedic all tried to keep his airway open, him breathing, neck aligned straight, and made sure he stayed alive until paramedics came 50 minutes later by snowmobile ambulance. Fighting for his life, Mike was transported by snowmobile ambulance off the lake, then by ambulance to the closest hospital in Michigan where a helicopter was waiting to airlift him to the ICU of a level 1 trauma center in Wisconsin.

Since this instant life changing event February 10th, 2017, Mike has been fighting to wake up from a coma and recover from his severe traumatic brain injury (TBI).

Family and friends of Mike Petri are raising money to pay for uninsured medical expenses associated with Catastrophic Injury. The plan is for Mike to go home with his sister (who is an RN). Donations are needed for home modifications, durable medical equipment, home health care, therapies, medications, medical supplies, and other expenses that won’t be covered by insurance. Help Hope Live assures fiscal accountability of funds raised and tax deductibility to the full extent allowed by law for donors. Donors can be sure that funds donated will be used only to pay or reimburse medically-related expenses. To make a tax-deductible donation to this fundraising campaign, click on the Donate Now button.

Thank you so much for your support!

Mike has moved home with his sister. He has his own soft-sided HBOT chamber that he uses multiple times a week.

Mike started walking in the pool February/March 2020! (trying to figure out how to upload the videos on here...) Then of course pool therapy was shut down with Covid 19

We are getting the house modifications finished up and getting ready to bring Mike home later this summer! He is still considered to be in a minimally conscious state - not communicating, eating, able to care for himself, etc. We have seen improvements doing hyperbaric oxygen therapy (HBOT) and he is more in tune, alert, and trying so hard to talk! We will be using money raised on Help Hope Live to pay for a Liftkar to be able to move Mike in his wheelchair up and down the stairs in the house. If we can raise more money, we would love to put that towards his very own HBOT chamber in home that he can use multiple times per week to aide in faster recovery!

What about the other guy? While the other guy Mike exchanged snowmobile skis with also went flying from his sled, he was unconscious for around 30 minutes then started moving around and talking. The group of snowmobilers he was with all left before help arrived (except for 1?). While it is not clear who's fault the accident was, the other guy did not have any insurance on his snowmobile (which was also a new Polaris). His blood alcohol content was 0.04 around 2 hours after the accident, which would bring it to around 0.07 at the time of the accident. So while he had 4Xs the amount of alcohol in his system than Mike, not enough to go after and no gain for Mike (who had insurance on his snowmobile). We have not had any contact from the other guy, but Facebook says he was back to his life and riding ATVs about a month after the accident. Frustrating when Mike had insurance and was responsible, he was not drunk or buzzed or doing anything stupid. And of course his fellow snowmobile group did not bail, they called 911 and did what they could to help and of course keep Mike alive for the 50 minutes it took for the paramedics to arrive.

Mike was in the hospital February 3rd-8th for a mild aspiration pneumonia. He was discharged back to the residential home with 10 days of antibiotics through his G-tube. He is better now.

Mike Strong merchandise is now available online on a newly opened Etsy store! Check out what we have for sale at: www.etsy.com

All proceeds from Mike Strong sales will go towards Mike's recovery.

On September 29th Mike moved back closer to family and friends to a residential home in Minnesota. While he does not have the specialized TBI trained staff and all the therapy/equipment he had in CO, he is set up with home therapy services where speech, OT, and PT will come work with him a few times a week. The transition was a tough 1 1/2 months of setbacks but now he is finally back to the state at which he left Colorado. He is still considered to be in a minimally conscious state, he is awake all day, will follow you with his eyes, follow a simple command, give a thumbs up or wave, he has said an occasional word, and is really good at laughing at funny things. We were able to get him his own very nice therapy bike that he is really good at peddling with his legs and will allow the machine to peddle his arms with the motor - thanks to everyone and a very successful 1st fundraiser!

On Tuesday 6/27, they attempted to do a spinal tap to see if there was an issue with too much CSF/pressure. He was poked 3 times in the spine and they were unsuccessful. (They will do an MRI of the spine next week to see if there's any blockage etc that they couldn't get any CSF)

Later on Tuesday Mike started having dark red urine. He also threw up some multiple times. In the evening when he had dark red urine again, he was poked multiple times for an IV and labs. He was very aggitated, moaning, and had a heart rate high around 130. He ended up going to the ER at the hospital next door that night. All labs came back good. They did another head CT that looked ok. Could not find anything wrong and sent him back.

Wednesday morning he threw up some more and had dark red urine again. We could tell that he was not feeling well, his heart rate was around 135. He finally started feeling better in the afternoon.

He was feeling better Thursday. Urology did a scope and found nothing wrong.

This morning (6/30), he went for a CT of his kidneys. Unfortunately his IV went bad and his hand/arm are all puffy and got poked multiple times for a new IV. Mike was tired today. This afternoon he was moaning in pain and got some more pain meds. They finally found something wrong with him, kidney stones! We feel bad Mike has been in pain dealing with kidney stones ontop of everything else going on but at least we finally know why and the Drs are working on a treatment plan.

-12 days after the accident, a tracheostomy and PEG feeding tube were placed

-After 17 days, he opened his eyes for the first time since the accident

-After 2 1/2 weeks he was stable enough to transfer to a hospital in St. Paul, MN to be closer to where his family lives

-Just after 4 months post-accident on 6/14, Mike got his trach out! He is doing well breathing on his own in & out his nose/mouth

-On 6/30, 4 1/2 months after his accident, Mike started laughing (appropriately)

-On 8/9 , 6 months after his accident, Mike had surgery to place a VP shunt to help get rid of a little excess CSF in his brain causing increased pressure

On 8/17 they changed Mike's feeding tube to a G-J tube. He has had issues on and off since the accident with throwing up. Now they give feedings in the jejunum (small intestine) and meds with water go in his stomach

Mike is a wonderful person and great friend. But, he'd be even cooler if he was a Packer fan. :D I'm pulling for you, Mike!

Thinking of you and praying for you quite often.

I'll see you again in a couple days Mike, Love you!

Mike, keep up the good work--you are strong--you can do this!

You're doing great, buddy! Much love, see you soon!

Note in memo:
In honor of Mike W Petri 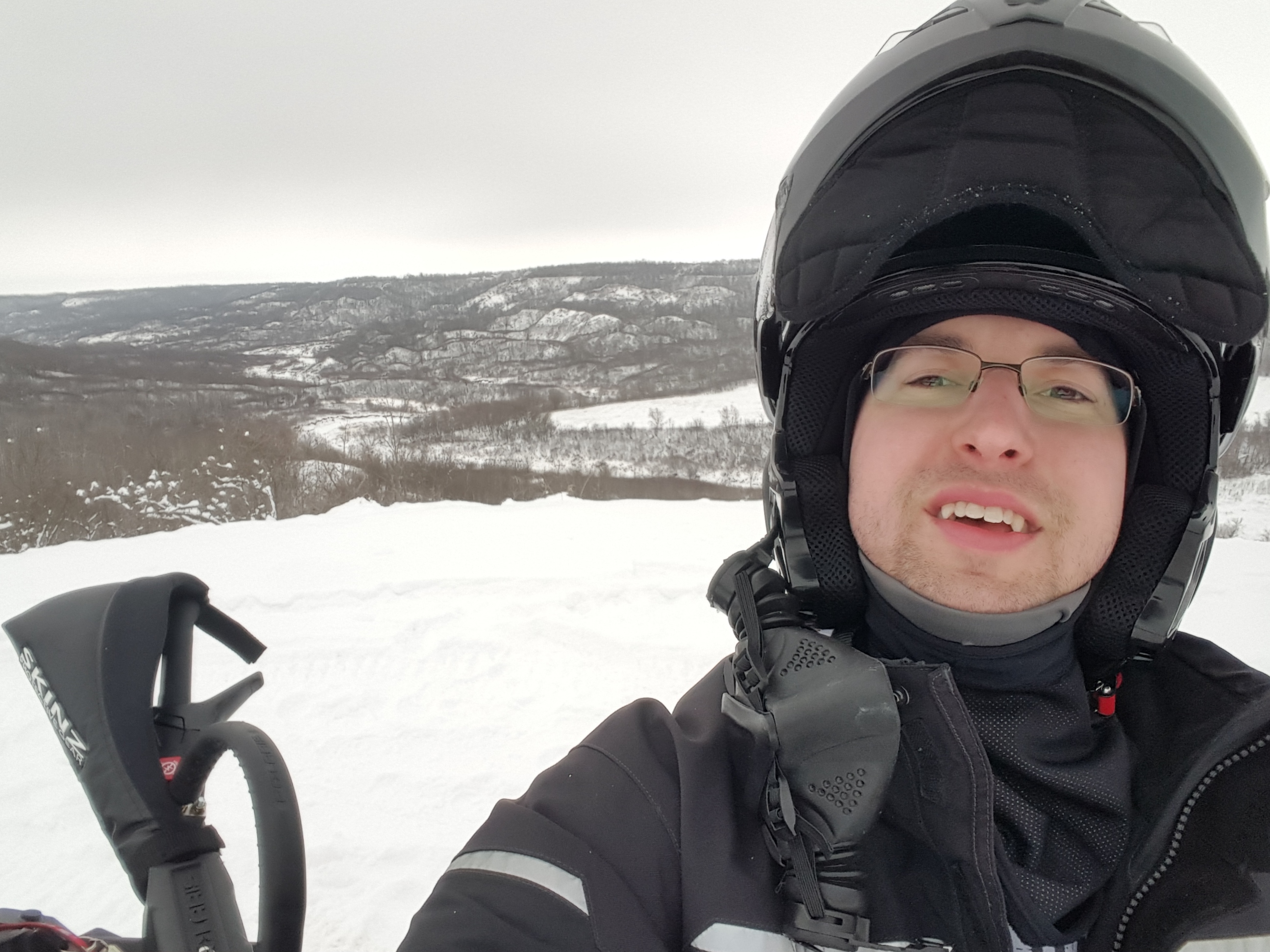