Note in memo:
In honor of SCOTT D OMAN

Family and friends of SCOTT OMAN are raising money to pay for uninsured medical expenses associated with transplantation.

SCOTT has chosen to fundraise with Help Hope Live in part because Help Hope Live assures fiscal accountability of funds raised and tax deductibility for donors. Donors can be sure that funds donated will be used only to pay or reimburse medically-related expenses. To make a tax-deductible donation to this fundraising campaign, click on the Donate Now button.

It has been a long hard year for Scott and our family, and it has been a long time since I have updated Scott's progress. The past year has been very trying for his recovery. It has turned out to be one hurdle after another. His medication for non-rejection did not agree with his system causing rashes, soreness of the mouth to the extent he could not eat, and acne. His Doctors started trying various other anti-rejection medications. One med caused his red blood cells count to go down dangerously low.

Scott contracted shingles but luckily they caught it early enough that the medicine to clear up shingles worked well and they were cleared up in two weeks rather than lasting several months.

Scott came down with a bad cold which put him back in the hospital for a couple of days to prevent pneumonia. His oxygen saturation went back down to the middle and low 80's causing him to go back on oxygen and he had high blood pressure.

After being released from the hospital, he has continued to use his oxygen only at night. The doctors had him come into the hospital two days in a row for 4-6 hour IV drip to help his anti-rejection drugs. It seems to have worked,as it lowered his blood pressure, and increased his oxygen saturation back into the 90's.

In October Scott has developed a stomach ache and nausea almost constantly. It makes food undesirable and he has lost a few pounds. Last week, he went to an orthapedic surgeon as he moved wrong and caused excruciating pain in his upper leg and hip. As of December 1st, 2018 he will have to have a hip replacement. The hip has totally deteriated and is ready to collapse...

Hopefully, he will be able to heal fast and have some quality, pain free time soon. He is a trooper and takes everything in stride, but he is getting weary and wants to have some relief. He will soon be the bionic man with all new body parts. Please send some much needed prayers. God Bless!

Scott has been healing day by day, however, there was a bump in the road on Monday, October 30, 2017. He had appointments at the hospital for labs, x-rays, PTF's, and his regular visit with the "Lung Transplant Team." Everything checked out alright. On the way home from the hospital, Scott got a pain in his abdomen, which kept getting worse and worse until he could no longer stand the pain and we were off to the hospital and emergency. After tests, x-rays, ultra sounds,etc it was diagnosed as an " angry pancreas" caused by gall stones. On Wednesday, November 1st they removed his gall bladder. He was released from the hospital on Thursday, November 2nd.

Scott has had enough surgeries and hopefully he is done. He has had more than his share, but he never ceases to amaze me....He takes everything in stride and doesn't complain. In fact, I am the one who is having a nervous breakdown!(figuratively speaking).

SCOTT, YOU ARE AMAZING, AND I LOVE YOU!!!

Since the transplant, Scott has had a backache and has a hard time finding a comfortable position to sleep. Earlier this week, he had an X-Ray of his back. It turned out he has a ruptured vertebrae in the middle of his spine and also another one on the lower spine. He went to the hospital today

(Sept 22) and had a MRI to determine what needs to be done to correct or at least treat. He will have to go to a specialist to get this taken care of. He had a Bronchoscopy to check out how his lungs are doing yesterday, and the lungs are doing good. Otherwise it is baby steps, and taken one day at a time. Thanks for your support.

Scott was diagnosed with COPD/Emphysema in October 2013 when we took him to Emergency, unable to breathe. He was admitted and stayed for 3 days. The Drs sent him home with an oxygen condendenser and two refillable tanks.

We made an appointment with a pulmonary specialist, and we received the diagnosis, "I'm sorry Mr Oman, there is nothing I can do for you, the horse is already out of the barn!!!"

Scott started regular visits with a different specialist, and she referred him to have a lung transplant. As can be imagined, Scott was extremely apprehensive about having that kind of surgery, "What if...

my body rejects the transplant? I can't just go get another one off the shelf."

After much going back and forth on the decision, Scott decided to go to the University Hospital and talk to the "Transplant team" to find out if he was a canidate to be placed on the transplant list. After talking to and getting information we decided to go into the program and give 110% to pass the battery of tests and going to rehab..

After passing most of the tests the team discovered a spot on his left lung and the rest of the testing was put on hold and Scott was scheduled for a biopsy to determine what the spot was---Well, a one night stay in the hospital turned into a ten day stay. Because of the procedure, trauma, and anxiety it caused him, Scott stopped breathing and was unresponsive in the early morning of the next day. He was revived and woke up to a breathing tube inserted and his hands tied down so he would not pull it out. He was in the hospital for ten days, at least 5 of those in ICU. GOOD NEWS THOUGH, THE BIOPSY WAS NEGATIVE FOR CANCER!!!

Scott resumed his tests despite the fear and apprehension of another surgery. After passing the rest of his tests, he was put on the transplant list. Two weeks later, he got the call and received a bi-lateral lung transplant on July 5, 2017. He received two heathy lungs and is at home and recovering nicely.

Scott was sent home with a grocery sack full of his meds that he has to take.

Between the two hospital stays, cost of a bi-lateral transplant, meds for the rest of his life, the bill is going to be hefty to say the least.

Please donate what you can, no amount is too small. God Bless

Sending healing hugs to you. You've got this!!

You have been so dedicated and steadfast. You are getting better everyday.

'I COULDN'T BE MORE PROUD OF YOU. YOU MAKE IT ALL LOOK SO EASY, I AM SO GLAD YOU ARE MY BABY BROTHER. I LOVE YOU VERY MUCH..

You have been so brave and you are my HERO. I love you!

Note in memo:
In honor of SCOTT D OMAN 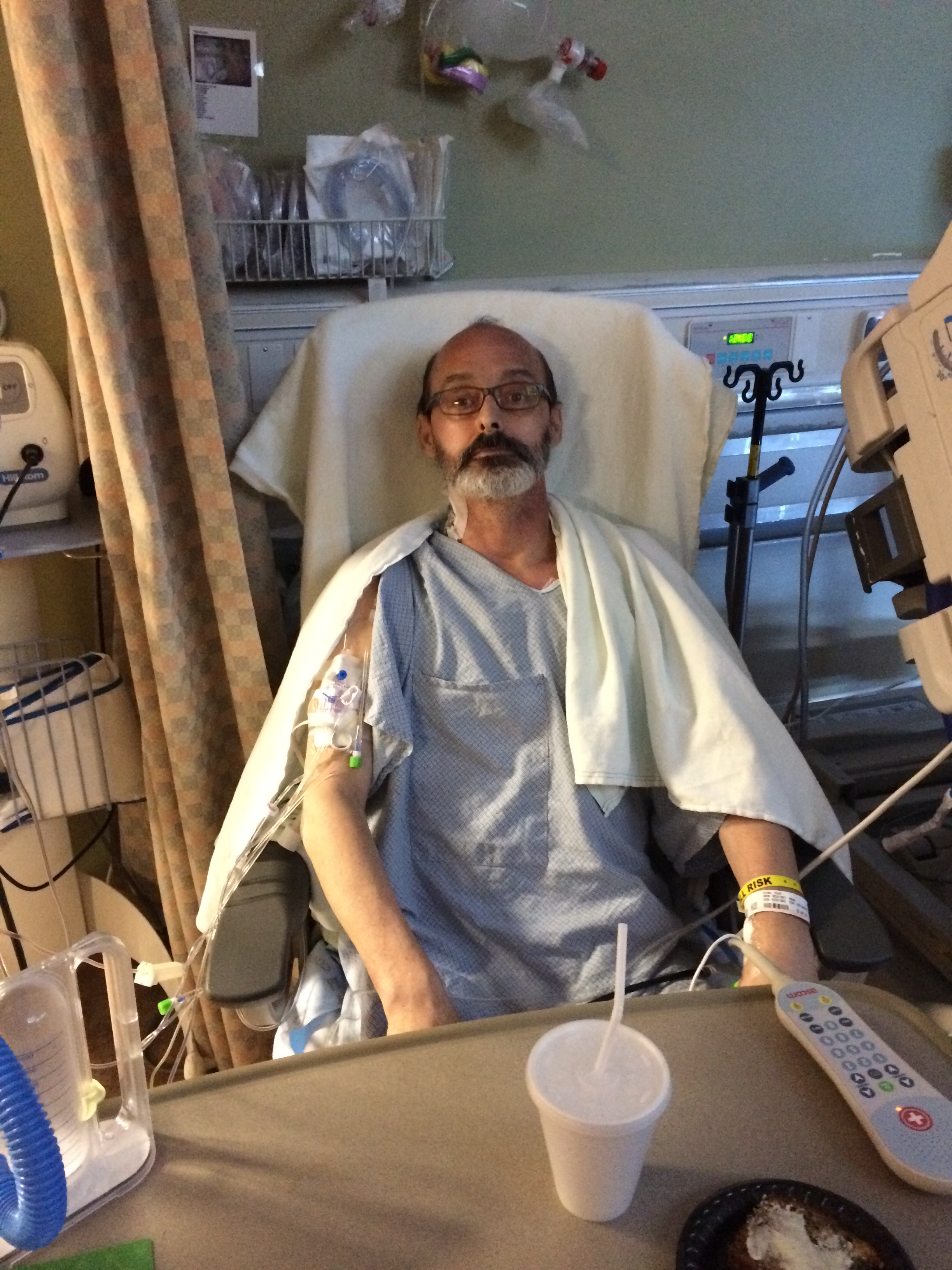