Note in memo:
In honor of Peter McEneany

GETTING TO KNOW PETER

Peter grew up in a military family and moved with his family to various states around the country depending upon where his father was stationed. Eventually they settled down in Santa Cruz, California where he finished his growing years and schooling as an excellent student and sports enthusiast.

Upon graduating high school, Peter moved to Kauai, Hawaii where he pursued his love of surfing and tennis, and became employed at a resort as both a maintenance technician and tennis pro.
This is where he met Ursula. They fell in love and have shared their lives together ever since.

After living on Kauai for 2 or so years Peter and Ursula moved back to Santa Cruz, where he began work in the construction field. As time went on, he started his own small construction business. After about ten years, Peter had a gallbladder attack and required emergency surgery. But, he recovered and life went on.

Peter enjoyed skiing and windsurfing. He worked on ski patrol at the Bear Valley Ski Resort in northern California, where he saved lives and helped accident victims, and also volunteered on safety patrol at San Luis Reservoir which is a state park and supplies drinking water to surrounding areas. He was responsible for rescuing wind surfers and sail boarders, which he did.

A few years later, his health began to fail again. This time it was a diagnosis of Crohn’s Disease. He was treated for the disease for many years but we couldn’t figure out why he wasn’t getting better. Turned out it was a misdiagnosis.

One day I came home from grocery shopping and found Peter near death. We rushed to the hospital emergency and it was soon determined to be Diverticulitis and another emergency surgery – 8 hours later 26 feet of intestine had been removed and a colostomy bag attached. His body had received such trauma and shock, that he became diabetic and has been ever since. Peter spent a month in the hospital and a year recovering at home.

It seemed to be one thing after another. It became apparent that Peter could not continue the things he enjoyed most as he was having to spend so much time recovering from his surgeries.

He was at one point able to get part-time work at Seascape Golf Course in Santa Cruz and was assisting with small clinics and the golf shop. Peter decided he would like to possibly teach golf. It is a low impact sport requiring less stamina and strength and he came to love this sport as well.

Not long after, Peter went to the dentist for a regular teeth cleaning. The dentist found a lump in his jaw and Peter was referred to San Francisco Medical Center for a scan and diagnosis. He was diagnosed with a rare tumor, which, while not a cancer, left untreated would eventually eat into his brain and kill him. So, another surgery, feeding tube and time spent in hospital.

Despite these life threatening incidents in his life, Peter refuses to go down without a fight.
Shortly after recovering from maxillofacial surgery and many follow-up visits, Peter somehow contracted Legionnaire’s Disease. He spent another two weeks in the hospital.

Sometime later, Peter was informed by his general practitioner that something had turned up in his blood and that it appeared his liver was malfunctioning. He had liver disease. He was referred to a liver specialist in Santa Cruz and was being treated. However, that doctor dropped the ball on Peter and did not follow up with him on a couple of different levels and his situation deteriorated. His general practitioner was stunned. Now, there was not turning back. No treatment. No hope. Unless ….. he could receive a new liver.

She immediately referred him to Stanford Hospital where he has been receiving excellent treatment for the past two years. We drive an hour in each direction for his doctor appointments and various procedures and chemo therapy. Peter has been put through hell just so he can receive a life-saving liver. Many of the procedures are quite painful and leave him drained and depressed.
But, he is now on “the list” and is “on call”.

Peter has suffered through several life threatening conditions and illnesses, and many surgeries. We are thankful that he has recovered from every one. Being told that he had liver cancer and non-alcohol cirrhosis has been devastating. He has lived a healthy drug free and alcohol free life. This has truly come out of nowhere. As both his parents are deceased, he doesn’t have a family medical history he can check to find out what might explain his various illnesses. To his knowledge his parents were healthy individuals.

Peter has no brothers and sisters. I, Ursula, am his main emotional support and when I can, I help out monetarily as well. He relies on friends for comfort and socializing when he has the energy. Peter loves to play guitar and go for walks on the beach. When he has a good day, he likes to play 9-hole golf with his buddies, but it leaves him drained of energy.

Peter has had to drastically cut back on the things he loves to do most and it is taking a toll on him emotionally. We long for this to be over and resume our normal lives as a loving couple and do the things that loving couples enjoy doing.

Peter is a loving caring person and has always engaged life and participated. His life-saving skills are stellar and he has never hesitated to jump in and save a life. Now, he needs saving. He has depleted his savings and he is now on Medi-Cal and social security disability. These are nominal ($900/month total) because he has been unable to work for so long.

I want Peter to be by my side for a long, long time. Peter wants to live.

Medi-Cal insurance will not pay for the much needed after care for this surgery to be successful. He will require 24/7 caregivers for at least one month, transportation to the hospital for follow up visits, either an apartment nearby the hospital, or a recovery facility of some sort, and other daily necessities. When he finally comes home, he will be on anti-rejection medication for the rest of his life.
We hope you can help. It would be so appreciated. We would be forever grateful.

We, his family and friends are asking you to join with us in fundraising for the nonprofit Help Hope Live in Peter’s honor, to help with expenses pre and post transplant. Again, insurance does not cover all expenses and we need to be near the hospital before and after his transplant. We need funds for temporary lodging, transportation, medications, home care and other uninsured medical expenses associated with transplantation.

Donations to Help Hope Live in Peter’s honor, will help ease the financial burden of the transplant and allow Peter to focus on a healthy recovery and serving the community he loves.

Peter has chosen to fundraise for Help Hope Live in part because Help Hope Live assures fiscal accountability of funds raised and tax deductibility for contributors. Contributors can be sure donations will be used to pay or reimburse medical and related expenses. To make a tax-deductible donation to this fundraising campaign, click on the GIVE button. And please consider sharing this link with others so they may donate as well.

Thank you for your prayers, support, and generosity.

Yours truly,
Peter and Ursula

Hello, Pete and Ursula! This is Frank Horner. Mike Brightwell and I were your neighbors at East Cliff and 17th in the alley. Every time I am in Santa Cruz I think of you and Ursula and wonder how I could get back in touch. Last time we (my partner Nanette) even drove in to where I remembered you parked to see if you might turn up in person. Anyway I am so sorry to hear of your health issues! My cell number is (505) 263-7611. If you are ever up to it, it would be so cool to talk again. I wish you guys the best.

Hey Pete & Ursula this is Jared, Leslie Ray Johnson’s son. I really hope you find the care you need to see this through. My dad still talks about you almost every time we talk and as a lifelong family friend I’d like to see you back kicking life’s ass like you always did. My prayers are with you and your family. Love, Jared Johnson

Note in memo:
In honor of Peter McEneany 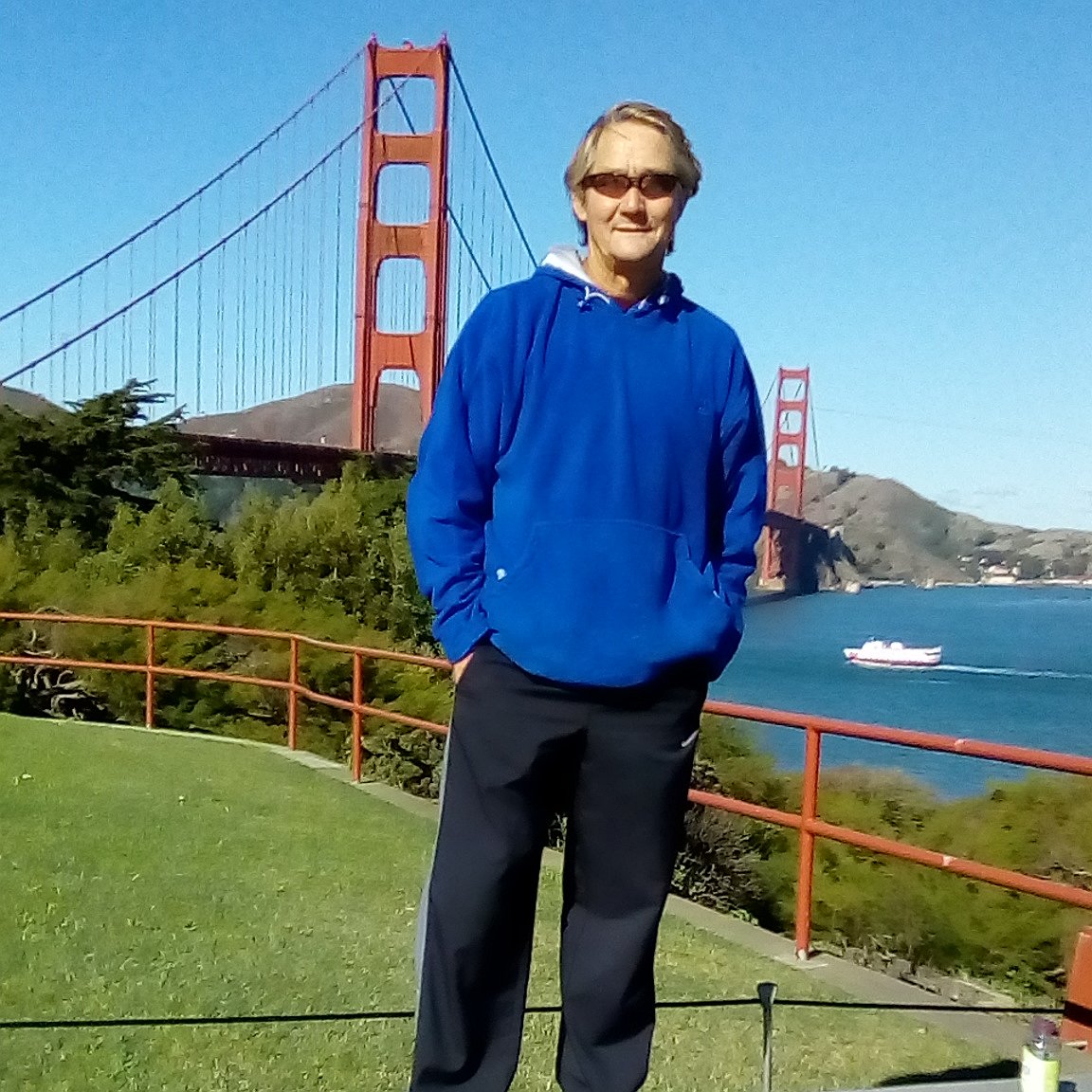