Note in memo:
In honor of Bill Gross

*Update*
Bill received his second set of lungs on 7/1/21. He’s had a minor setback, but is doing great overall! His hospital stays and medications are costly, so we thank everyone for the support!

*Update* We cannot thank you all enough for your generous donations. After almost 3 years, we unfortunately have to do it again. There was a small complication at the beginning of the surgery, that has caused his airways to fail. In order to correct this, he has to go back on the list for a second transplant.

Bill Gross was born with a genetic condition called Alpha-one Antitrypsin Deficiency. This disease causes emphysema in the lungs over time. In 2003, Bill’s lungs were deteriorating quickly, and he was listed for a double lung transplant at Temple. Years went by, and he only received one call. He was eventually taken off the list and decided that maybe he wasn’t meant to have lungs.

At the end of 2017, he decided to try again. His lung capacity was at 18%, and he could no longer enjoy his favorite hobbies, such as riding his Harley, working on motorcycles, walking the dog, and going places with his close friends. He was on oxygen almost 24 hours a day, and was uncomfortable even sitting down resting. He knew that his body could not handle much more, as it starved for oxygen every day. He knew time was running out, and he was listed again, but this time at the Hospital of the University of Pennsylvania. This would be his last hope.

On June 2, 2018, Bill finally received the gift of a new life in the form of two lungs; a gift that he has been waiting over a decade to receive. He had a very rough month in the hospital but is looking forward to his journey toward recovery.

However, his new life comes with a price. Bill is on several medications to keep his lungs healthy for the rest of his life, some of which insurance does not cover. He is also traveling back and forth to Philadelphia each week for therapy, and the cost of hotel rooms is adding up. He is on a fixed income, and cannot afford all of his necessary medications.

Bill is so thankful for his many friends who have been so supportive of him. He is the type of person who would always lend a helping hand when needed. Now, he’s the one who needs our help. Please consider donating, so that he can have a better life. Bill should only have to worry about getting better and getting all the years back of his life that he missed.

Please spread the word! Any donation will help! It is finally time for Bill to live the life he deserves.

After almost 3 years with his new lungs, Bill’s transplant team determined that his airways are no longer viable, and he has to get back on the list for his second bilateral lung transplant. Bill was met with many complications since his first transplant, and he was able to overcome them all. Now, he needs our help again to help him over this hurdle and get another new set of lungs.

As of July 18, Bill is back in the hospital for another week. There was a scab where they attached his esophagus, and it fell off prematurely. He is currently receiving IV medications there, and is hoping to be released soon.

Stay strong and keep the faith!!!

Hi Bill, Thanks to your neice Tia I have learned of your story of courage and hope while on the mend. We are kindred spirits hubby and I gave up biling 2 years ago no time to ride to keep the bills paid and we miss the ride as much as you sir. Once that free ride spirit is in your soul tho you carry it with you always.lol. Prayers of healing and peace for you and your cherished ones are being sent as you journey forward sir. Try to enjoy the ride even though the road is bumpy sometimes. Mary and Bud Eveland

Note in memo:
In honor of Bill Gross 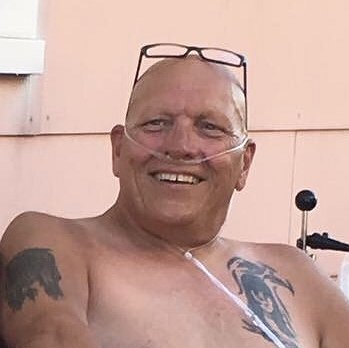