Note in memo:
In honor of Jim Hardy

In October 2003 while riding an ATV on a hunting trip with his brother and cousins, Jim Hardy, now 51, had an accident that would change his life and that of his family forever.

Prior to his accident Jim grew up playing soccer in the Pee Wee League through high school. As an adult he was active as a coach in a local intramural league and enjoyed running, hunting, fishing, hiking, camping and just being in the outdoors with his two sons, now 20 and 21..

Since his accident, Jim now lives with a spinal cord injury between his T10 & T11 vertebrae which means that he has no feeling below his waist. He spent 2 weeks in the hospital, followed by 3 months in Magee Rehab, after having spinal reconstruction surgery that resulted in him having rods and screws placed in the posterior and anterior of his spine. He then came home with a body shell (removable cast) for 3 months which was followed by another six weeks in rehab.

Jim is determined not to allow his injury to stop him from living a full and productive life. He continued to work at a job that he has had for the past 30 years, but due to health issues was not able to keep working.

Unfortunately he now is unemployed since November 2012. He has been confined to the first floor of his two story home and has been forced to convert his dining room into a bedroom. The doorways throughout his home are not wide enough for his wheelchair to fit through.The bathroom is too small as well, so he is unable to access the bathroom without the assistance of his son who lives with him in order to help him with these tasks. He also needs a garage that he can access in inclement weather as he can not clear snow off of his own vehicle. His sons are now at the age where they are never home to help him.

Since his accident Jim has become a divorced father of two with high medical expenses associated with his condition, along with a couple of medical procedures that he needs to have done. He is also eager to find or build a home (or Addition) that will be accessible for him. He would love to be able to spend time with his sons rather than rely on them to help him so much. A home where all of the rooms are accessible to Jim is his dream; to live independently without relying on his boys for help with his daily needs.

Jim has chosen to fundraise with Help Hope Live – The Leader in Fundraising Assistance and Support for Transplant and Catastrophic Injury in part because Help Hope Live provides both tax-deductibility and fiscal accountability to contributors. Contributors can be sure that funds contributed will be used only to pay or reimburse medically-related expenses. For more information, please contact Help Hope Live at 800-642-8399.

Note in memo:
In honor of Jim Hardy 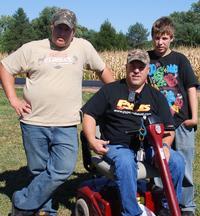