Note in memo:
In honor of Randy S Koerber

Randy Koerber is a man of many titles. He is the son of Ronnie and Darlene Koerber, and the brother of Ricky and Tammi. Randy is the husband to his beautiful wife, Jody, and the father of their three children, Kyle (29), Kevin (27) and Kelly (19) and the father-in-law to Jess (26). Randy recently gained the title of grandpa to his Bunky, sweet baby Weston. He is the coworker of some, uncle/brother-in-law of many, and friend to even more.

Randy has suffered through four heart attacks, with the first one at the young age of 29 in 1994; the most recent, on May 18th, 2020. This last one has sent him on a downward spiral. His preexisting Diabetes has led to a series of complications on his road to recovery. As if it isn’t hard enough to go through something this scary, imagine going through it during a world wide pandemic with so many rules and restrictions in place. COVID-19 has prevented so many things for so many people, but for Randy, it has kept him from holding his first grandson. It has prevented his family from being by his side during much of this uncertain and scary time where they didn’t even expect him to survive.

On Monday, May 18th, Jody drove Randy to Ascension in Franklin to get tested for what they thought was a case of COVID-19. It turns out Randy has suffered from a heart attack, in which symptoms appeared differently than in the past. On Tuesday, May 19th, it was determined that Randy needed to be transferred to St. Luke’s in Milwaukee where the hospital was better equipped to help with his severe medical needs. Flight for life was called, but was unavailable. In order to survive the transfer by ambulance, Randy underwent a Balloon Pump surgery to do the work of his heart. Once he arrived at St. Lukes it was determined that an LVAD, a device used to assist in pumping blood through the left ventricle, needed to be sewn to the heart. Before this surgery could take place, however, all of Randy’s teeth were removed due to the worry of infection spreading from his teeth to his heart during surgery. Shortly after the LVAD was inserted an emergency surgery to repair a possible leak in the right ventricle was performed, as well as, sedation and paralyzation to keep him motionless as his chest was left open to give the heart more room to heal properly.

After only the first night of being medically paralyzed (medically induced coma), Jody received the heart wrenching call, at nearly midnight on May 25th , for the family to come to say their last goodbyes. The first time the family would see him since he was first admitted on May 18th. Within the short 30 minute drive that felt like forever, they were able to get his heart back into normal rhythm, but still were unsure he would make it through the night. At arrival, Jody was told that there had been small steps in the right direction, but that he was still in stable, critical condition. Randy continued to be sedated in a medically induced coma for 13 days. While in the coma, Randy underwent another surgery in which an RVAD was inserted. This device was to help strengthen the weakening right side of the heart. It was just a temporary solution, a Hail Mary to save Randy’s life. Heart arrhythmias continued to be an issue resulting in VTACH, an irregular heart beat, in which his heart needed to be shocked back into a normal rhythm. June 1st was Jody’s first visit since she was told to come say what she thought would be her last good bye. On June 5th, Randy was weaned off of his sedatives and was awake, but with much support. Starting June 6th, Jody was allowed two, two hour visits a week. These visits help Randy gather even more strength and courage to continue to push through.

After a month and a half of waiting with no answers, the doctors started talking about the possibility of a heart transplant. In order for this to happen, Randy needed his kidneys to start working properly (meaning no more dialysis), his body to become stronger, and to be able to eat and breathe on his own. A month later, on July 3rd, when Randy checked off all of the above except proper kidney function, he was officially put on the top of the transplant list, for both a heart and kidney. On the Fourth of July at 1:20PM, Jody received the word that a great match of a strong heart and kidney were found from the same donor. Unfortunately, our joy came at a cost to both the donor and their family. It was hard to find complete happiness knowing a life was lost to save Randy’s.

July 5th, 2020 is the day Randy was given a second chance at life with the thanks of his heart transplant, his new birthday. Following that on July 6th, Randy underwent his kidney transplant. By July 7th, he was sitting up in a chair, and by July 12th, with much assistance, he was able to take his first steps with his new heart and kidney. With so much time being in critical condition and major improvements so quickly after his transplants the doctors referred to Randy as a medical miracle. The nurses tried to make Randy’s recovery as fun as possible with Sunday Funday and Tuesday “Beer” (Sprite) Pong. Randy continued to make great progress and was finally released from ICU to the Step Down Unit on Thursday, July 16th . About a week later, on July 24th, we finally found out that insurance had approved Randy to move to the Rehab Center at St. Luke’s hospital, where he continued to work hard and strengthen his body. With many bumps along the way and 84 days in the hospital Randy was finally released to come home on Thursday, August 6th.

After being home for only a week, Randy was readmitted to St. Luke’s due to low oxygen levels, later leading to concern of infection at his incision sites. Infected excess fluid was found around the new kidney that was treated by IV antibiotics. It is clear that Randy is not in the clear yet, and that there continues to be a long road to recovery. In addition to the staggering medical cost, of course, Randy has not been able to work since being first admitted to the hospital. It continues to be unclear if Jody will be able to return back to school at the start of the school year, as Randy will need constant home care. While Randy has health insurance, medical expenses continue to pile up on top of the cost of daily living.

We have already been blessed with an outpouring amount of love, prayers, and positive thoughts. On top of the emotional support, we have been overwhelmed by the generosity of family, friends, and strangers. Continued donations to the nonprofit Help, Hope, Live can help ease the acquiring financial burden of a transplant and other medical expenses, which will allow Randy to focus on a healthy recovery, and a long life ahead with Jody and his family.

We are raising money in Randy’s honor for the nonprofit Help Hope Live to fund uninsured medical expenses associated with transplantation.

We chose to fundraise for Help Hope Live in part because Help Hope Live assures fiscal accountability of funds raised and tax deductibility for contributors. Contributors can be sure donations will be used to pay or reimburse medical and related expenses. To make a tax-deductible donation to this fundraising campaign, click on the GIVE button. And please share Randy’s page on your social media so others may donate as well.

My thoughts and prayers are with you and your entire family.... You and your family are my family!

My thoughts and prayers are with you during your recovery.

We continue to hold Randy and his family in our thoughts and prayers. We are here for you!

Stay strong Randy. May God bless you and your family through this tough time.

In honor of Randy S Koerber...Keep up the recovery, you've got a beautiful family & sweet Grandbaby who need you ❤

Randy & family. You are constantly in our thoughts and prayers. Stay strong and keep fighting. Love, Ralph & Betty Michels

Note in memo:
In honor of Randy S Koerber 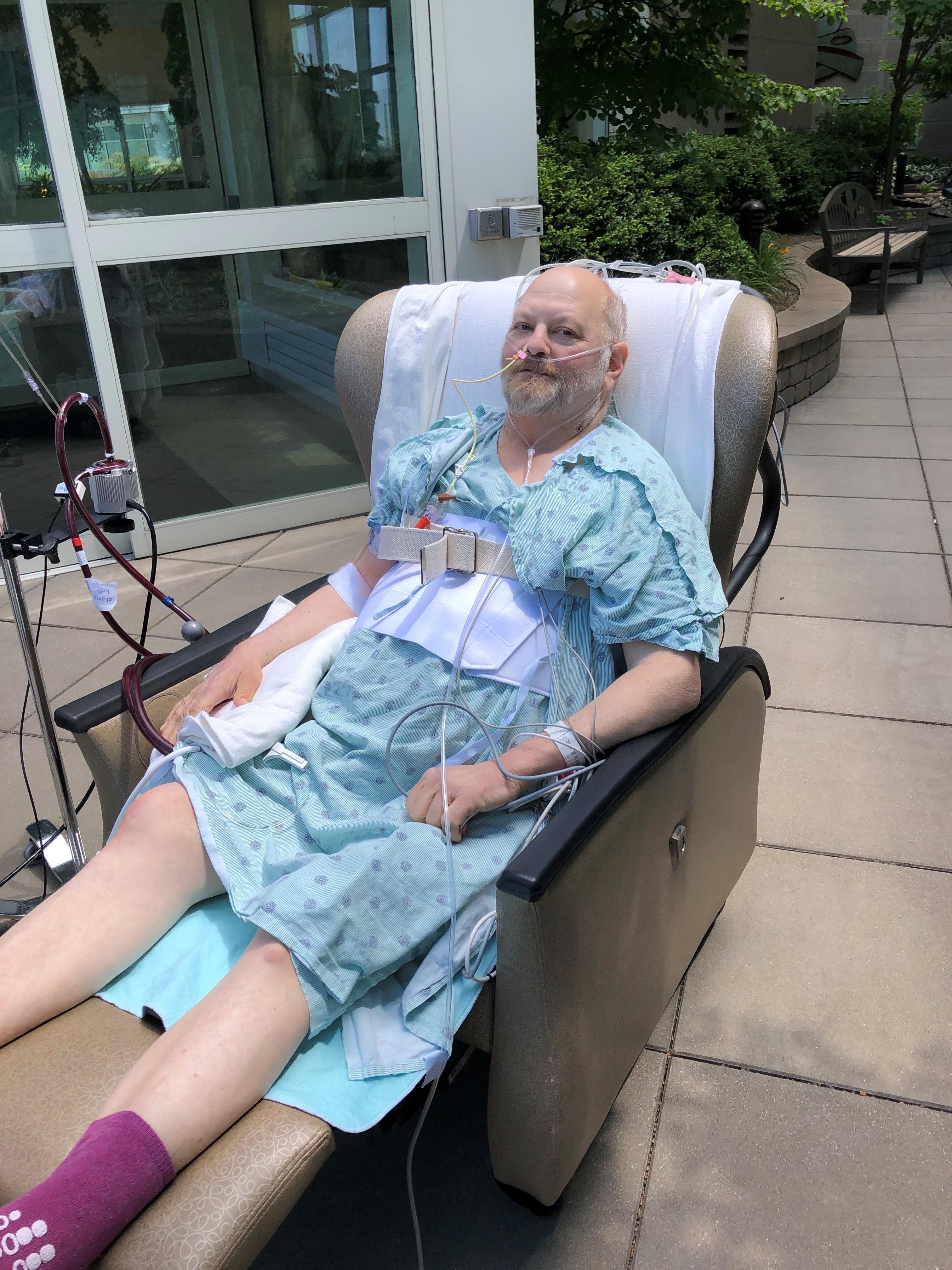