Note in memo:
In honor of Jared Lucas

As many of you know, Jared Lucas was able to receive a kidney transplant on March 29, 2011. The surgery and recovery went much better than expected and Jared has been able to enjoy life with his family more than he ever thought possible. However, as he was approaching his two year transplant anniversary, things changed.

Over the past few months, Jared had been feeling all of his newfound energy slip away. After many doctor visits where nothing was found that would explain why Jared was so sick, on April 12th time seemed to stop as he and his wife were told Jared has an aggressive neuro-endocrine carcinoma that had spread to his liver. Jared spent that weekend at home with his family, preparing to fight, getting ready to send this bear into hibernation.

Chemotherapy started as soon as the weekend was over. The 2nd round was to begin last week, but doctors discovered that several readings on his blood work were not right. The doctors found a blockage and/or infection in his liver and possibly gallbladder. Knowing this was too big of a medical problem, the awesome team at St. Patrick Hospital sent him via Life Flight to Virginia Mason Hospital in Seattle. Jared’s wife and kids packed up the car and drove overnight to be with him. It is not certain how long Jared will have to be in Seattle.

Even with insurance, the family faces many uninsured expenses — expenses which will place a burden on the family finances.

To help with this financial burden, a fundraising campaign in Jared’s honor has been established with HelpHOPELive, a nonprofit organization that has been assisting the transplant community for 30 years. All donations are tax-deductible, are held by HelpHOPELive in the Northwest Kidney Transplant Fund, and are administered by HelpHOPELive for transplant-related expenses only. Your contribution is greatly appreciated.

Thank you in advance for your support during this difficult time.

The Friends of Jared Lucas

Thanks for sharing your photos, Jared. Kim is excited about using them for his paintings. Kim and I are so happy to know that you are able to enjoy your family and time at Triple Creek. I wish we had known about your fund last year - we had no idea! You and your family are an inspiration and we are pleased and proud to know you and enjoy your work.

I've been getting updates from Tammie each week. Sounds like everything went well and you both continue to improve day by day. We'll be praying that they continue that way for many, many, MANY years.

So happy to hear that you are scheduled and wishing you all the best. As I'm up in the Seattle area every once in a while, let me know if I can bring you anything or just stop by for a visit.

Best wishes for you and your family. Remain positive always. Its great to be able to help people out.

Hi, Jared. You look such the old cowboy in that photo! I am tempted to show it to all of my friends here in Ireland just to witness the thrill they'd get at seeing The Wild West in the flesh. ;) Hope you are bearing up. Would love to hear from you on Facebook or by email if and when you have a moment. My friends in Seattle would like to see you when you get out there. Becah lives there. Let me know if you want her number.

Note in memo:
In honor of Jared Lucas 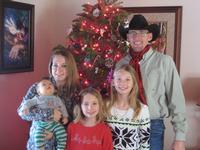