Note in memo:
In honor of Kurt Paul

As many of you may already know my brother Kurt has been courageously battling end stage renal disease. He is on dialysis three days per week – this is keeping him alive. Though he is doing fairly well on this treatment, he is still unable to work. We are told that his only real shot at a long and healthy life is to receive a kidney transplant as soon as possible.

Kurt, single and forty five years old, was raised in Cedarburg. He attended Parkview, Webster Traditional and graduated from Cedarburg High School. While in high school one of his finest achievements was to play football with the Bulldogs. Sports were Kurt’s interests and he went to as many Green Bay Packer, baseball and basketball games and as many wrestling matches as he could.

While in high school Kurt worked at Burger King in Grafton. After graduating Kurt attended M.A.T.C. in Milwaukee and W.C.T.C. in Pewaukee for training in food preparation. He worked as a line cook at the Chancery in Mequon and part time at McDonalds. He lived in Mesa, Arizona for a few years before returning to Cedarburg. He was fortunate to get a job at Dimat but had to stop working in 2009 when his kidney function decreased.

Due to the extraordinary expense of transplantation, as well as Kurt’s inability to work, funding this life-saving operation is a monumental task. Despite having insurance, many of his medical needs are not covered and must be paid out-of-pocket. This presents a challenge Kurt cannot meet alone.

To help offset his uninsured costs, a fundraising campaign in Kurt’s honor has been established with HelpHOPELive (formerly NTAF), a nonprofit organization that has been assisting the transplant community for nearly 30 years. All contributions are tax deductible, are held by HelpHOPELive in the North-Central Kidney Transplant Fund, and are administered by HelpHOPELive for transplant-related expenses only. You can help make a difference in Kurt’s life. Please consider making a contribution.Together we can make a difference by assisting Kurt during this difficult time. Thank you in advance for your generosity and support.

I'm a classmate of Kurt's from Cedarburg. I was sad to read about his health concerns in the 10/16 edition of the News Graphic. I send prayers of healing to you Kurt!

We are so happy to help! And still miss your smiling face at work!!

Note in memo:
In honor of Kurt Paul 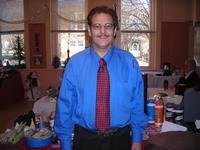