Note in memo:
In honor of Charles Bordeaux

Help Charles get his kidney transplant.

Hello, my name is Charles Bordeaux; my friends call me Chuck. I was born on February 20th 1979 in Alabama and raised in California by my parents, Darlene Bordeaux and Phyllis Hickey. I graduated from Arroyo Grande HS in 1997 and attended UTI in Phoenix, AZ and graduated with an Associateâ€™s degree in HVAC. I joined the pipe fitters union local 403 in 2001 and moved up in the ranks quickly, and in 2006 became a foreman and would be for the next few years. I was even put in the General Foreman position a few times.

In February 2010, I was severely ill with pneumonia and was diagnosed with a rare but aggressive form of kidney disease called IGA Nephropathy. IGA Nephropathy is hereditary and causes the immune system to overreact to upper respiratory infections such as pneumonia, which in turn causes kidney failure. Over the next year my doctors tried to save my kidney. In February 2011, I was hospitalized while working as a pipe fitter foreman at Watts Barr Nuclear Power Plant in TN â€“ my kidney function was down to 3% and I started dialysis. Back in California I tried Peritoneal Dialysis so I could work during the day. While working in Nevada I once again became ill due to a massive infection in and around my dialysis site. I was put back on hemodialysis three days a week and have not been able to work since. I have been told that my only chance at a healthy life is to have a kidney transplant.

My brother and several friends have stepped up and are willing to be my living donor. Transplantation is expensive and my transplant center has told me that I must raise $15,000 to be placed on the active list. Even with insurance I will face many uninsured transplant-related expenses such as: co-pays and deductibles, doctor visits, donor expenses and the costly immunosuppressant medications that I will need to take for the rest of my life.

To help with this financial burden, a fundraising campaign in my honor has been established with HelpHOPELive, a nonprofit organization that has been assisting the transplant community for 30 years. All donations are tax-deductible, are held by HelpHOPELive in the Southwest Kidney Transplant Fund, and are administered by HelpHOPELive for transplant-related expenses only. Your contribution is greatly appreciated.

Thank you in advance for any help you can give to help me reach my goal of receiving a transplant which will vastly improve my quality of life and allow me to return to work.

Tried and True Tattoo held a Halloween tattoo special and a raffle. They raffled off a $200 gift certificate with all the proceeds going towards our fundraiser. With the help of Tried and True Tattoo and all of their loyal customers, friends and family we raised $700. If you are ever in the Arroyo Grande Ca area swing by Tried and True and say hi, maybe get some ink.

Today we went to Smart and Final and found out how to get bbq supplies donated. We also located a site for our first bbq. We are shooting for the Sat after Thanksgiving. I just want to let everyone know that the amount of love you all have shown is overwelming. Thank you so much.

Once again a must thank everyone for your support and kind words. From the bottom of my heart I thank you all.

I just wanted to thank everyone for your support. Hopefully we can reach the goal and i can get a kidney.

Chuck, we are praying that your new kidney comes soon! Much love,

Hang in there Chuck. As with most guys in High School I also had a crush on you. The thirst is real! Love you, and I donated, so I expect you to put out. I'm kidding of course, but stay positive my friend. We're all here for you.

Chuck, you're going to make it, brother! We are all sending some major positive energy to you, and you deserve it. Best wishes,

Your in my thoughts and prayers Chuck.

Our prayers are with you Chuck. God bless you always.

You have mucho mucho support, and many folks who love you, Chuck!

Just finished my donation through Campaign for the Community. Best Wishes Chuck

Tried and True Tattoo just made a donation! Keeping our Chuck alive and KICKING! We love you amigo!

Sending all the hope we can muster. My 4 year old daughter lost her kidney a few weeks ago due to her current cancer treatment. We know all too well how devastating health problems can be for all parts of your life. We have been very fortunate to have some amazing support from family and friends and wanted to pay it forward, wish it was more! Good luck Chuck!

Talked with 14 year old Molly who had her Kidney transplant last year at Stanford. Asked her to prayer for you, Chuck. It's your turn now!

I am so happy that you found a doner Chuck, what a wonderful, selfless gift.
You are in my thoughts and prayers for a healthy and speedy recovery and if you need some time to rest, you know you are welcome here. Please come over to the most healing place in the world, HAWAII. Chillax in PARADISE BRO!

You're an amazingly strong and caring man, Chuck, and I hope that everyone who knows anyone that has been lucky enough to know you will support you any way that we can.

The world needs more people like you. It's been a while since I've seen you but I definetly want the chance to run into you for many more years!!!
Love ya-Chuck!!!

We love you, Chuck. For someone who is always doing so much for others, it's about time we get our turn to do something for you!

You make me proud to call you friend. You are one person that I hold up to others as an example of always being positive, no matter how bad things get you are optimitic, and have been an inspiration to me.

We love you, Chuckles! We are going to make this happen!!

Note in memo:
In honor of Charles Bordeaux 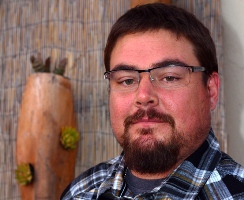