Note in memo:
In honor of Terry Key

My son, Terry was diagnosed with End Stage Renal Failure November 2011, at the age of 23. This came as a complete shock to Terry and his family. Since November 2011, Terry has been on kidney dialysis three times a week for four and a half hours each time, resulting in his not being able to work. Terry is doing fairly well on the life saving dialysis treatment but needs a kidney transplant for a chance at a long and healthy life.

Terry has completed his medical evaluation at Scott & White Memorial Hospital and been deemed a good candidate for a kidney transplant. Currently, Terry continues an active status on the national and statewide kidney transplant waiting list. Also screening of a living donor is in the process now. Although Terry has medical insurance there will be a number of medical expenses not covered by insurance.

To offset his uninsured costs, a fund raising campaign in Terry’s honor has been established with HelpHOPELive, a nonprofit organization that has been assisting the transplant community for 30 years. All donations are tax-deductible, are held by HelpHOPELive in the South-Central Kidney Transplant Fund, and are administered by HelpHOPELive for transplant-related expenses only. Your donation is greatly appreciated

To make a tax-deductible donation to this fundraising campaign, click on the Donate Now button.

To our family, friends, and those that are helping us on this journey. As yall know my son Terry has ESRD. He received a blessing (kidney) from an angel (Jimmy Ashby) on April 2nd. After 12hrs of receiving his new kidney something went wrong and Terry’s new kidney had to be removed. Everybody was so very disappointed, but not as disappointed as Jimmy & Terry. Jimmy because he felt sorry Terry would still be on dialysis. Terry felt bad because of all Jimmy gave up for him. Jimmy had said if he had a 3rd kidney, he would give it to Terry again. Both are recovering from their operations and starting to resume their daily routines with restrictions. We have expanded our family tree & made many new friends throughout this ongoing journey. There are soooooooooooo many caring people here! I want to express a heartfelt thank you to everyone for all their prayers, thoughts, well wishes, time, energy, donations, & continuing support! Please keep Terry & Jimmy in your prayers. Although only GOD knows why this happened, we believe He has a purpose and a grand plan for Terry & Jimmy!
God bless yall!
Love yall!
Edith & family!

Terry has received a life changing gift. Jimmy Ashby (an angel) has donated one of his kidneys to Terry. We found out the great news on Wednesday afternoon, 2/19/2014. I will keep everyone updated on Terry’s progress of when the surgery will take place. Check back for updates. Thank ya’ll so much for your prayers & support!!!!!!!!!!!!

Terry is a young man with a big heart, he loves God, family, friends, and being outdoors. We are praying for a bright future for Terry. Thank you so much. Edith Key

I'm sooo beyond happy for you Terrry and I'm glad you are my best friend. :)

Note in memo:
In honor of Terry Key 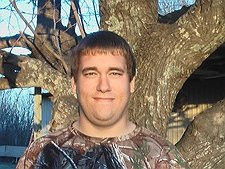