Note in memo:
In honor of Terry Simmons

Support Terry and Leanne as They Support Each Other

Terry Simmons has battled kidney disease for 14 years. Doctors at Mayo have been able to help, however they advised Terry, and his wife Leanne that eventually the disease would progress to kidney failure and that Terry would need a kidney transplant.

â€œIn sickness and in healthâ€, those were the vows that Terry and Leanne Simmons made 15 years ago. Little did they know how important those vows would be one day. In November, 2013 Terry was placed on the Kidney Transplant list. Not long after that, Leanne decided to have herself checked as a potential donor. Amazingly, she was a match! Leanne has jumped at the opportunity to give Terry the ultimate gift of life and a new lease on life.

Even with insurance there are out-of-pocket expenses including travel to and from doctor appointments, temporary relocation expenses around time of transplant, and lost wages for the living donor.

To help with this financial burden, a fundraising campaign in Terryâ€™s honor has been established with HelpHOPELive, a nonprofit organization that has been assisting the transplant community for 30 years. All donations are tax-deductible, are held by HelpHOPELive in the Great Lakes Kidney Transplant Fund, and are administered by HelpHOPELive for transplant-related expenses only. Your contribution is greatly appreciated.

Join us in wishing Terry and Leanne the best as they complete this amazing story. They would appreciate your prayers for a successful procedure and improved health for Terry in the future.

Family of Terry and Leanne

As of Friday, we are 2 weeks post op! The surgeries went as planned and we are both feeling better day by day. We are grateful that my kidney is working for Terry! Now that he is less painful from surgery, we are starting to see the positive effects of this for his quality of life. Tomorrow, I go for my 2 week post op appointment and hope to be cleared to not have to return. Terry continues to go back weekly to U of M for follow up, next week a stent will be removed and of course on-going bi-weekly lab work to detect early signs of rejection so that medications can be adjusted. We pray that we just keep moving forward! Thank you to our friends and family for their dedication and commitment in supporting us with their prayers and assistance!

Note in memo:
In honor of Terry Simmons 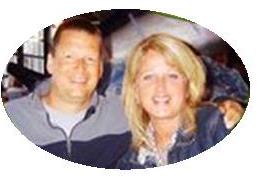