Note in memo:
In honor of Courtney Woodberry

Courtney Woodberry is a talented, artistic, and kind young woman with great potential who has spent the past four years battling cancer.

Courtney graduated from Summerville High School, where she played flute in the marching band. She attended Winthrop University, where she studied music and psychology. After college, she became interested in the legal system, and began working in a law firm while studying for a paralegal degree at Greenville Tech. She is a member of Disciples United Methodist Church in Greenville, SC, where she is active in the Salkahatchie outreach program. Courtney also performs fire arts and acrobatics with Timtv and the Secret Cirkus.

In 2010, Courtney was diagnosed with Hodgkin’s lymphoma. Since then she has undergone three rounds of treatment, including radiation, chemotherapy, and stem cell transplant. But the cancer keeps coming back. Courtney is now a candidate for a bone marrow transplant at Duke University Medical Center. This is a long and very expensive process. Courtney must live within five minutes of the treatment center for at least three months. Her parents, Debra and Joe, will go with her to be her caregivers during this time. Courtney has medical insurance, but it does not pay for all of the expenses related to her care. The non-medical expenses alone are staggering, and no family should have to carry this burden alone. This is why we are reaching out to our community.

To help with uninsured expenses, a fundraising campaign in Courtney’s honor has been established with HelpHOPELive, a nonprofit organization that has been assisting the transplant community for 30 years. All donations are tax-deductible, are held by HelpHOPELive in the South-Atlantic Bone Marrow Transplant Fund, and are administered by HelpHOPELive for transplant-related expenses only. Please, if you can, make your donation today.

On behalf of Courtney, Debra and Joe, we thank you for your financial support, your prayers and your healing wishes.

THANK YOU everyone for your prayers and generous support. Courtney is now being treated by her oncologist in Greenville. Recently she was hospitalized for a few days in Greenville to receive IV fluids and medications. Now she continues regular visits to the clinic and has also begun physical therapy. We continue to hope for weight gain.

Thank you one and all for your generous contributions. Courtney is out of the hospital now and back at the apartment. Our routine of daily visits to the clinic continue. We continue to deal with digestive issues and are hopeful that a new medicine will help. Your prayers sustain us and we are grateful.

Courtney was admitted to Duke Hospital yesterday. We are hoping that it will be a short stay. They removed her Hickman Cath. An infection was detected. Also diagnostic tests are scheduled to figure out the cause of the digestive issues. Thanks to all of you who are supporting us. Your financial gifts are deeply appreciated. Your prayers sustain us. Peace and love to all.

Courtney continues to improve. Today is Day 59 in the 100 day countdown. This weekend she will be off of the TPN (IV nutrition) and we are hoping for her to maintain or gain weight without it. Thank you for your prayers and support.

Courtney spent 2 weeks in the hospital. It was a taxing experience. She was discharged yesterday and now we are back into the routine of going to the clinic each day for labs and evaluation. At home we are working to find the right foods that she can handle and will help her gain weight. Thank you to all for your prayers and support.

Thank you Thank you to everyone who has donated. Your generosity is very helpful and deeply appreciated. We are now in Day 31 of the Transplant 100 Day Journey. It is a daily walk as each day the Medical Staff at Duke checks all sorts of blood counts, electrolyte levels, etc. Then the needed meds are applied. We are praying that Courtney's energy level will increase. Also we are looking forward to hearing the report regarding engraftment levels. Most importantly, we appreciate your prayers. God bless each of you. -Debra

Each day Courtney has an appointment at the adult bone marrow transplant clinic at Duke. They check her blood counts and chemistry on each visit. If needed then she gets potassium, etc. Her numbers are still moving slowly toward the desired numbers. We are grateful for the excellent medical personnel that attend to her each day. We are also grateful for the comfortable housing that your support helps to provide. And of course we are being sustained by your prayers and well wishes. Thanks and love, Debra

A thousand thanks to Courtney's anonymous bone marrow donor! We give thanks for you daily.

The last two days have given Courtney numbers indicating good progress. She is we hope coming out of the neutropenic valley. Your prayers sustain us and we are appreciative.

Tomorrow is the big day. Courtney is scheduled for the transplant in the morning. Thanks for all of your support and prayers.

Thanks for your prayers and well wishes as Courtney begins treatment today.

We are settled in our apartment in Durham. After a preliminary procedure today, Courtney's treatment begins tomorrow. Thanks and love to all. Debra

This is a busy week for Courtney. She celebrates her 27th birthday, and she leaves for Duke, where she will spend the next few months undergoing bone marrow transplant.

Thanks to everyone for your prayers, your healing wishes, and your financial support.

Dear Debra, Courtney and family,
On behalf of all the Methodists is the Columbia District, I send prayers and love and hope for healing. May God hold you all in his love.
Rev. Cathy Jamieson-Ogg
Columbia DS

You remain in my prayers for healing and for strength.

Hi Courtney,
We are thinking about you, as well as Debra and Joe, every day and sending prayers that you will continue to get stronger with each day. At church today, your family was lifted up again in prayer. We miss you all and hope to see you back home soon.

Courtney,
You are in our prayers.
Love,
Denise, Dennis & Joey

Courtney, You and your family are in our prayers. Stay strong and positive, and know that God is watching over you.

Courtney,
I don't know how I missed it but I just found out about your illness. I'm so grateful that it appears a donor has been found. My prayers are with you and your family - I remember how strong and confident you were at Winthrop and I'm sure this battle has only increased that strength and resolve. Blessings and love and strength to you!

You are all in my thoughts. Keep on keeping on.

Hank and the Hernias

Our prayers are with you each day. May you continue to show improvement.

Alyssa and I love you to freaking death. We will be throwing each other around soon. We left a donation for you too, it was modest but I hope it helps.

Day 16 of 100. Seems longer. However Courtney's blood counts continue to rise. Today is a good energy day. The low energy days are not as low. The persistent GI problems are improving and she has gained a few pounds.
We are so very blessed by your prayers, concerns and gifts. Thank you all and keep praying.
Joe, Debra and Courtney

I just learned of Courtney's illness. I will be praying for her recovery and that God gives all of you strength.

We know for sure that God is Good. Prayers are being said!

Thinking of you and praying for you every day. I also have another on line prayer group that I am a member of praying for you. I am sure there are prayers pouring from many directions, far and wide. We will all be anxious for updates.

Thinking of you, your family and friends as you make your journey and take the next step(s). My thoughts are of you having the strength, courage and love to sustain all.

Praying for you all and hope all goes well.

Thinking of you and sending positive thoughts your way today. We're walking with you here and can tell you that we love you guys and look forward to seeing you on the other side of this procedure, I know you've got a huge amount of courage as you've already proven that. All of you hang tough as we love you and are here with anyneed we can help you with!!

Courtney, you and your parents are in our prayers and thoughts each day. You are such a beautiful, vibrant young woman!

Our prayers, love and thoughts are with you, Courtney. May you feel the warmth of God's love and grace as he carries you through the coming weeks. Special love and hugs to your precious, loving parents as well.

Courtney,
Looking forward to seeing you at Bovinoche cookout again next year!

Thinking of you, Mom and Dad and sending a hug for good measure!

praying for strength, compassion and success during the long days ahead.

With love and prayers for your healing and help in these days.

We are thinking and praying for you!!
Love,
Glen, Kathie, Will, and Olivia Carroll
Hubey Griffis, Hugh Griffis

Courtney, you remain in our prayers and always good, happy thoughts are being sent your way, as well as for your family.

Words of love, words of hope, words of support from those you know and don't know are being sent your way. Receive them filled with courage and let them strengthen you in His grace and peace.

We love you and are praying for your proceeder to go well.

I knew your mother before she met your dad and was privileged to know him as well. My wife and I have one daughter, who is close in age to you. We will lift you up in prayer in our respective churches and prayer circles and we'll spread the word for prayers up here in Pennsylvania.

We will be praying for you, your family, and your medical team. May you find all the courage, wisdom, and grace you need day by day.

Courtney, you are a warrior and a hero.Your army of supporters is with you all the way.

Note in memo:
In honor of Courtney Woodberry 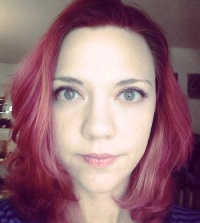