Note in memo:
In honor of Andrew Wilcox

Andrew Survived an Accident and Needs Your Help

Andrew Wilcox, a senior at Middle Tennessee State University, was preparing to graduate in December of 2014. His life suddenly changed when he sustained a spinal cord injury following a fall on a camping trip. Andrew has no use of his legs and limited use of his arms. Andrew spent three weeks in the Vanderbilt Trauma Center and was then flown to a rehabilitation facility in Atlanta where he is receiving intensive in-patient therapy. He will return later for 6-8 weeks of outpatient therapy.

Andrew graduated from Riverdale High School where he spent 4 years on the swim team. He was a dedicated sandwich artist at Subway where he worked for more than 5 years. He is active at the Catholic Center at MTSU, serves as the social chair, and is active at St. Rose church serving as the lead usher at evening Mass. Andrew joined the Knights of Columbus this year.

In spite of the many struggles he faces, Andrew remains positive that he will be able to return to school and have a productive life in the community. The support of family and friends has been great and he looks forward to the many visitors he has had during this difficult time.

We are hoping to purchase a modified vehicle that will provide Andrew with greater mobility and independence. Due to Andrewâ€™s height, we need a van with a large opening to accommodate him while riding in his wheelchair; estimates for a used vehicle are around $40,000. We also need a lift to move Andrew from his bed to his wheelchair. To help offset such expenses, a fundraising campaign in Andrewâ€™s honor has been established with HelpHOPELive, a nonprofit organization that has been assisting the transplant community for 30 years. In 2000, they expanded their mission to include those who have sustained a catastrophic injury. All contributions are tax-deductible, are held by HelpHOPELive in the South-Atlantic Spinal Cord Injury Fund, and are administered by HelpHOPELive for injury-related expenses only. If you would like to make a contribution:

Please help us in our efforts to help Andrew whether by making a donation or reposting this anywhere you can. Also look for fundraising events on his HelpHOPELive campaign page. Thank you for your support.

I have no idea how I did not know or hear about your accident, but I just heard tonight. I do not understand things like this, but I am now praying for you daily.

We have not met you, except through the article in the Tennessee Register, and saw you attend St Rose, where we once were parishioners. We pray Jesus is with you all the days of your life to offer hope, peace, and strength. God bless you!

Hey Andrew, I have never met you, but your Grandmother Juanita Lamb was very special to me while I was at Rockvale. She was so much fun to be around, and a true friend. She would be so proud of how much you have already overcome. She was not a quitter and would expect no less from any of her children or grandchildren. So keep on keeping on, and continue showing that Nita Power! Praying for you daily.

Praying for you DAILY

Andrew, I met you briefly as I was helping my nephew Hunter at the Shepherd Center. It's so cool you are in his same room. Rest assured that room is covered in prayer! Glad you will return home soon!

Note in memo:
In honor of Andrew Wilcox 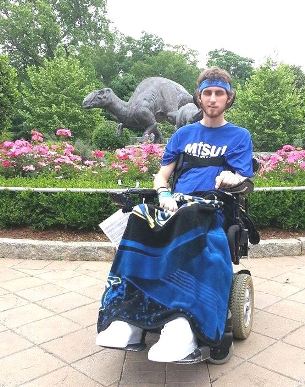