Note in memo:
In honor of Zack Irby

On January 28th 2013, the Irby’s received a phone call no parent should ever have to experience. They were told their son Zack had been in a terrible vehicular accident with a tractor trailer truck. He had been airlifted to Wake Forest Baptist Hospital. The Irby’s would later be told that their little boy suffered from a traumatic brain injury.

The type of injury that Zack sustained was a diffuse axonal brain injury and doctors were unsure if he was going to make it past 72 hours… but he did. After Zack had made it past the 72 hour mark the doctors said that he would probably remain in a vegetative state for the rest of his life…. but he’s not! Zack Irby is a one percent survivor and since his accident he has made miraculous improvements and it is all because Zack has a powerful God who has been fighting for Zack and taking care of him throughout this journey.

Once Wake Forest stabilized Zack he was moved to the Carolina Rehabilitation center in Charlotte, NC. While Zack was there he took part in intense physical therapy, speech and occupational therapy. He was making great progress when insurance carelessly denied any further investment in Zack’s rehabilitation and sent him home for us to care for him.

Mentally Zack did great at home. He regained his short term memory and really started to come out of his “fog”. Physically Zack started to regress and in July he ended up back in the hospital due to blood clots in his lungs. Though he remained in the hospital, there was a silver lining. Zack got approved for more inpatient therapy. He started at WakeMed Rehab Hospital for about three weeks and then on to Shepherds Center’s out-patient rehabilitation in Atlanta, GA. It is the worldâ€™s largest brain rehabilitation center. Zack’s recovery has been tremendous so far but he still has a long road ahead of him. His full recovery will take about a year and that year will be full of doctors, rehab, and full-time care. We are up against an enormous financial challenge we cannot face alone. We need your help.

To assist with the immense challenge of financing uninsured therapies, home modifications and other injury-related expenses, a fundraising campaign in Zackâ€™s honor has been established with HelpHOPELive, a nonprofit organization that has been assisting the transplant community for 30 years. In 2000, they expanded their mission to include those who have sustained a catastrophic injury. All contributions are tax-deductible, are held by HelpHOPELive in the South-Atlantic Traumatic Brain Injury Fund, and are administered by HelpHOPELive for injury-related expenses only.

Friends and Family of Zack Irby

Zach, I met your mother a few days ago in Goodwill. I was more than amazed to hear your story. I shouldn't be though, because our God is all powerful and he is most definitely is the creator and orchestrator of your story. I told your mother and will let you know, I am praying for you daily. I will keep track of you online and am excited for what the Lord has in store for you.

Note in memo:
In honor of Zack Irby 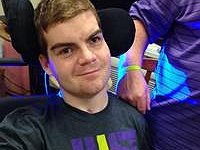