Note in memo:
In honor of Michael Sayih

My son Michael was born two months premature and suffered severe brain damage. Doctors said that he would never walk, talk or live a normal life and they, and others, suggested Michael be institutionalized. I believed that little Michael could inspire others and live a productive, functional life. Years of therapy and long days with many volunteers who helped Michael with a variety of therapies caused Michael’s mother to abandon him and his brother.

I continued to maintain the plan to help Michael, and was awarded custody of Michael and his therapy continued. Expenses continued to mount and have become a severe hardship. With only my limited police officer income and limited insurance, getting needed help for Michael has become more difficult.

Today, Michael is 22, has graduated high school and is active in his community. He volunteers at the local police department by delivering the internal mail and has graduated from the Community on Patrol Academy. Michael also helps to fundraise for various organizations including Shriner’s Children’s Hospitals, Best Buddies, Canine Companions and Make a Wish by participating in 5K runs, bicycle rides and other activities. He cannot physically do these activities on his own, so I am his “wheels,” — pushing him in the events.

Now Michael needs your help so that he can continue to help himself. Even with insurance, Michael will have many uninsured medically-related expenses such as caregiving expenses for three hours every morning and every night and physical therapy four hours per week. Michael has been on the MedWaiver list since he was seven years old. Fundraising for caregivers and physical therapy will greatly help Michael’s quality of life and allow him help others as he inspires people to serve others.

To help offset these and other expenses, a fundraising campaign in Michael’s honor has been established with HelpHOPELive, a trusted nonprofit organization that has been providing community-based fundraising guidance to patients and their families for more than 30 years. All donations are tax-deductible, are held by HelpHOPELive in the Southeast Catastrophic Illness Fund, and are administered by HelpHOPELive for illness-related expenses only. Click on the Donate Now button on this page to make your contribution.

Many thanks for your support!

January 11th – The Triahlon Clinic scheduled for January 16th has been cancelled due to low registration. 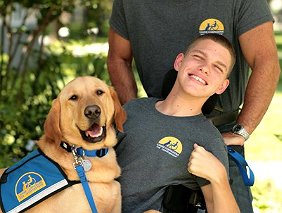 KEEP SMILING YOU WONDERFUL BEHIND BOY!

rock on Michael, Jim & all who pedaled

Honored to help you Michael.

Note in memo:
In honor of Michael Sayih

Our success as a fundraising site for medical bills wouldn’t be possible if it weren’t for our outstanding partners.
Premium Partners