Note in memo:
In honor of Jason Puckett

On January 27th, 2014 Jason’s car spun out on an icy road in Indianapolis. The car flipped numerous times and the roof collapsed on his head, compressing his spinal column. Jason sustained a C6 and C7 fracture resulting in an incomplete spinal cord injury. He’s paralyzed from the chest down but Jason fights to regain strength in his arms and function in his hands. He had a three week stint of intense therapy immediately after the accident and is currently in a skilled nursing rehab facility until he can move in with his sister and her family in Grand Rapids, MI.

Recently, Jason has developed additional feeling and movement in his hands and we are hoping to improve upon this with another round of intense inpatient therapy followed by outpatient therapy. Hand movement and improving strength in his arms and trunk are our immediate rehab goals. Simply put, continuous and proper rehabilitation would be life changing for Jason, but are very expensive.

While Jason has good insurance coverage, it does not cover all medical expenses. He has significant out of pocket expenses. Fees for doctor visits, rehab, and his care at the nursing facility weigh heavily. It’s likely in the future insurance will stop paying for his rehab. In addition, once he comes home he will need a specially modified van and adaptive devices to ease his independence and live an active life.

To help with the financial burden of Jason’s uninsured expenses, a fundraising campaign in his honor has been established with HelpHOPELive, a trusted nonprofit organization that has been providing community-based fundraising guidance to patients and their families for more than 30 years. All donations are tax-deductible, are held by HelpHOPELive in the Great Lakes Spinal Cord Injury Fund, and are administered by HelpHOPELive for injury-related expenses only. Please consider making a contribution towards Jason’s future.

Thank you in advance for your support; it will mean the world to Jason.

The time is nearing for Jason to come home. We need help raising the funds to get a van. I can't express how much having one would improve his life! Our new home unfortunately isn't on the bus route and private transportation is very expensive.

Also, we'd like to start some fundraisers. If anyone has any ideas or is interested in volunteering please let me know. Call or text me at 616-818-9657 or email me at [email protected]

Thank You to all of Jason's friends who stopped by the Camel Toe Bar (CTB) campsite in the Michigan International Speedway (MIS) Infield this past weekend (June 13-14) to donate money towards getting Jason an accessible van. With your help we raised a total of $259.00, and we will be doing it again at the next two MIS infield appearances of the CTB at Faster Horses (July 17-19) and NASCAR (August 14-16).

Jason needs a wheelchair van in order to be able to get around once he is out of the rehab facility.

Note in memo:
In honor of Jason Puckett 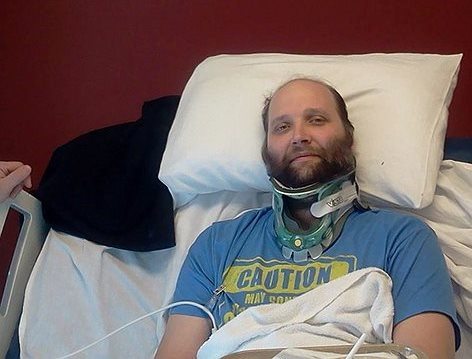