Note in memo:
In honor of Mariann Adams

An amazing colleague and friend who was severely injured in a car accident and is now a quadriplegic needs our help to purchase a wheelchair accessible a van.

On August 16, 2014, while on a business trip to participate in a trade show while working for Keymark Enterprises, Mariann Adams (Keymark’s General Manager) and her husband Scott Reneau, with Keith Dietzen (Keymark’s CEO) and his wife, Trudy Dietzen, along with Bryce Tychsen, a Keymark designer and Jack of all trades, were traveling from Johannesburg to Durban, South Africa. As the result of a head-on collision, Mariann sustained severe injuries throughout her body, the most permanent being to her spinal cord, leaving her a complete quadriplegic. Tragically, Trudy and Scott did not survive the accident. Keith and Bryce were not severely hurt.

Following the accident, Mariann spent three weeks in an African hospital where she underwent several surgeries. Once stabilized, she was airlifted from Johannesburg to St. Anthony’s Hospital in Denver, Colorado, where she spent a month recovering from her surgeries and many broken bones. She was then transferred to Denver’s Craig Hospital, a premier spinal cord injury rehabilitation hospital. After spending three months at Craig, she was moved to Care Meridian in Lakewood, Colorado, where she continues her recovery.

Not only did Mariann and I work together for more than a decade, unfortunately we share a common, yet extremely uncommon experience. On September 22, 2013, I broke my neck in a motocross accident. Following the accident, I spent weeks paralyzed from the neck down, and like Mariann, I spent several months at Craig Hospital recovering. It’s because of this shared experience, that I can relate, like few others, that to be dependent on others to perform menial tasks, let alone to be dependent on others for survival, is a way of life no one should be forced to endure. However, with dignity, strength and perseverance, Mariann faces this reality every single day.

Mariann’s ability to be mobile outside the assisted living facility has been, and continues to be severely limited. To help remedy this situation without putting additional stress on her finances, and to help her be as absolutely mobile as possible given her condition, I offered to hold this fundraiser to help her purchase a wheelchair accessible van.

Finally, if you know Mariann, even just a little bit, then I don’t have to tell you that she would give the shirt off her back, along with her shoes, and any strength in her muscles or in her heart to help anyone that she found in need, so please help her as much as you can.

To make a tax-deductible donation to this fundraising campaign, please click on the Donate Now button.

Mariann - you are amazing and we can't wait until you can have increased mobility to help you live a fuller life.

Note in memo:
In honor of Mariann Adams 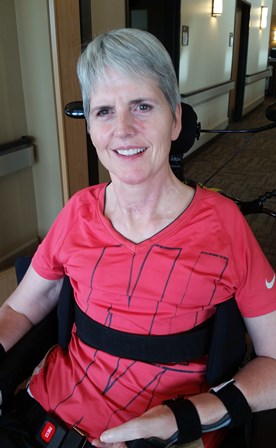